One of this week's books was Dovey Coe. I finished reading it last night, since I was addicted to the story. 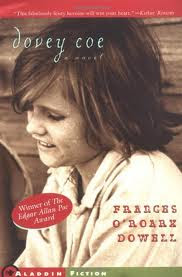 Title: Dovey Coe
Author: Frances O'Roark Dowell
Publisher: Aladdin Paperbooks
Published: 2000
Pages: 181
Chapters: 17
Reading Level: YA
"My name is Dovey Coe and I reckon it don't matter if you like me or not. I'm here to lay the record straight, to let you know them folks saying I done a terrible thing are liars. I aim to prove it too. I hated Parnell Caraway as much as the next person, but I didn't kill him."
Dovey Coe says what's on her mind, so it's no secret that she can't stand Parnell Caraway. Parnell may be the son of the richest man in town, but he's mean and snobby, and Dovey can't stand the fact that he's courting her sister, Caroline, or the way he treats her brother, Amos, as if he was stupid just because he can't hear.
So when Parnell turns up dead, and Dovey's in the room where his body is discovered, she soon finds herself on trial for murder. Can the outspoken Dovey sit still and trust the city slicker lawyer who's still wet behind the cars to get her out of the biggest mess of her life?

Review:
I thought it was amazing. You really feel like Dovey Coe in the book. It's sad to think about, but that makes this book all the better!
I can relate to Dovey. I don't act like a lady myself, I'm usually outside running around and making messes. I just hope I'm not put on trial for murder..
I love Amos, I don't know why, maybe it was because he saved Dovey or because I envy why he doesn't really say anything. I mean, he's deaf and hasn't heard a sound from anything or anyone since he was born, kind of crazy, right?
Caroline is really pretty, I get that. I was appalled when Parnell proposed and  she practically yelled no at him. It was a nice touch.
Parnell is a troubled boy. He gets what he wants and could have anybody, and he knows it. But there's one thing he can't have -- Caroline. And usually someone with that kind of power would be able to, but Parnell doesn't give up on the night he proposes and Caroline says no. His heart turned even colder from that. That's why he killed Tom, I bet. Mostly to get back at Dovey, saying she can't always watch out for Amos and his dogs.
But Amos saves the day. Sure, sure, Tom may have died, but he still has Huck, and Dovey and the rest of his family.


The book is heart-warming and mysterious. My type of book.

Email ThisBlogThis!Share to TwitterShare to FacebookShare to Pinterest
Marked as: Books, D, Reviews