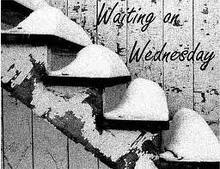 Waiting on Wednesday is a meme hosted by Breaking the Spine to highlight upcoming releases we're anxiously awaiting. This meme is always time-consuming since there are practically hundreds to choose from.
Comment with the link to your WoW post and I'll come visit :)
WARNING: Waiting on Wednesday is a great way to tell others what kind of books you like and are waiting for, but could make your TBR topple over. Continue with care. . .
My WoW picks of the week:

The Demon Trapper's Daughter
Jana Oliver
February 1st, 2011
Seventeen-year-old Riley Blackthorne wants to become a legendary Demon Trapper just like her father. How hard can that be? Way hard when it comes to the Trappers. Most of these guys don’t want a girl in their Guild, and the others spend their time staring at her breasts. Now the demons are calling her by name, which isn’t good news. Riley just needs a chance to prove herself. Which is exactly what Hell is counting on.

Trapped
Michael Northrop
February 1st, 2011
The Breakfast Club meets The Blizzard of the Century: A young adult suspense novel from PW Flying Start author Michael Northrop. Scotty and his friends Pete and Tommy are among the last kids waiting to get picked up at their high school. The snow has been coming down for hours, and it's starting to look like no one is coming for them. As the snow piles higher, their teacher Mr. Gossell leaves them behind to seek help--and disappears into the drifts outside. Now the seven remaining students are on their own, with no food and no electricity, facing a night of sleeping on classroom floors. Will their friendships survive the night . . . and will THEY?

The Iron Witch
Karen Mahoney
February 8th, 2011
Freak. That’s what they called seventeen year-old Donna Underwood in high school after a horrific fey attack that killed her father when she was just a child. Her injuries and rehabilitation resulted in magically enhanced strength, thanks to the iron tattoos branding her hands and arms. As a child of the alchemists, she is both blessed and cursed with a magical heritage that doesn't leave much room for boys, parties and homework. Now, after ten years of wishing for a normal life, she finally has to accept her role in the centuries-old war against the darkest outcasts of Faerie: the Dark Elves. Aided by a gorgeous half-fey dropout, Donna must race to save her best friend’s life - even if it means betraying one of the world’s greatest secrets and confronting the very thing that destroyed her family.
So..what are your WoWs this week? Leave a comment!
Written by: Hannah @ Every Little Thing at 2:40 PM