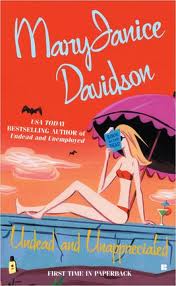 "As you would say, this is so totally the opposite of thinking this over.
"Where is your spirit of adventure?"
"It wore off during World War Two," she replied dryly.”
Title: Undead and Unappreciated
Series: Undead #3
Author: MaryJanice Davidson
Source: Library
Date Finished: January 16, 2011
Summary of Book:
The third book in the hilarious Undead series.
Reluctant vampire queen Betsy Taylor may rule the topsy-turvy world of the undead, but now Betsy's discovered that she has a long-lost half-sister who's the devil's daughter--and destined to rule the underworld.
Review:
I flew through this book in a day. The series is an easy read series, but it's still hilarious and full of adventure. But I really, really liked this one :D I mean, helllllooooooooo? The vampire queen's half-sister is destined to be the ruler of the underworld..Who wouldn't want to read about that?
I have to say I was a little surprised when she started reading the book and went crazy. I thought she would be  like immune it to or something. But nooooooooooooo, she hurt Jessica(physically), Marc(emotionally) and ditto with Sinclair.
And that was bbaaaaaaaaaaaaaaaaaaaaaaaad(yes, I do realize I've been stretching out my words - lol).
But, I really did enjoy this one and get to read #4 in the series soon(since I got this one and Undead and Unreturnable at the same time), so you guys will get to hear what I have to say about that one in a couple of weeks!

☺☺☺☺
Until next time. . .keep thinking about every little thing!
Written by: Hannah @ Every Little Thing at 3:58 PM

Email ThisBlogThis!Share to TwitterShare to FacebookShare to Pinterest
Marked as: D, Reviews