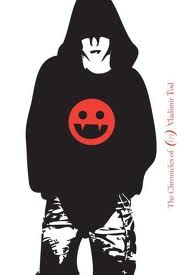 Summary of Book:
Middle school. Lovely. Especially when bullies harass you, your dream-girl (Cough, cough, Meredith, cough) prefers your best friend, and people are after you... Trying to stick a sharp hunk of wood through your chest. Doesn't make sense? Well, lets list the possibilities of why this would happen... 1. Your mom was a human. 2. Your dad was a vampire... Let's stop there. With no idea of the extent of his powers, Vlad struggles daily with his blood cravings and his enlarged fangs. When a substitute teacher begins to question him a little too closely, Vlad worries that his cover is about to be blown. But then he faces a much bigger problem: He’s being hunted by a psycho vampire, bent on his demise. Lucky for him, the tables are turning...

Review:
I love the cover. So original. Yet, so unique. And yet, all the other covers are just like that. LOOK:

Ok, well not exactly. But, still, they are awesome :D


Another different vampire series, and this was I actually like! A kid being half-vamp, half-human without the guidance from a mentor? It's just intriguing. And I love the vamp smileys!! Their cute. Anyways...

I like Brewer's Eight Grade Bites. It's unique from the others where they were all bitten to become a vampire, and they were adults! A boy that is half human, half vamp is just different. In a good way. It was nice to get away from the stories where people say this gorgeous person started walking towards them, they felt something on their neck and then they woke up and BAM! They were a vampire.
So, like I said, it was nice to get away from the normal vamp chaos ;)

I like Vlad's friend, Henry. But I hate his uncle. I mean, he couldn't tell him that he was going to be faking it in front of council? Their family, and it's just weird.

Then, again, what's normal about vampires?

Email ThisBlogThis!Share to TwitterShare to FacebookShare to Pinterest
Marked as: B, Reviews