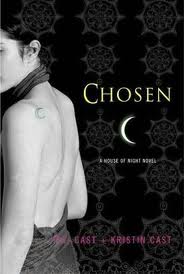 Summary of Book:
Dark forces are at work at the House of Night and fledgling vampyre Zoey Redbird’s adventures at the school take a mysterious turn.  Those who appear to be friends are turning out to be enemies.  And oddly enough, sworn enemies are also turning into friends.  So begins the gripping third installment of this “highly addictive series” ( Romantic Times ), in which Zoey’s mettle will be tested like never before. Not only is her mentor, Neferet, the High Priestess, she also has a dark secret that Zoey is starting to uncover. Her best friend, Stevie Rae, is undead and struggling to maintain a grip on her humanity. Zoey doesn’t have a clue how to help her, but she does know that anything she and Stevie Rae discover must be kept secret from everyone else at the House of Night, where trust has become a rare commodity.  Speaking of rare: Zoey finds herself in the very unexpected and rare position of having three boyfriends. Mix a little bloodlust into the equation and the situation has the potential to spell social disaster.  Just when it seems things couldn’t get any tougher, vampyres start turning up dead. Really dead. It looks like the People of Faith, and Zoey’s horrid step-father in particular, are tired of living side-by-side with vampyres.  But, as Zoey and her friends so often find out, how things appear rarely reflects the truth.......

Review:
Another great cover for the House Of Night series. I think I'm going to add some House Of Night accessories(buttons, shirts, pencils, etc..) onto my Christmas list for 2011. I love how they always have the crescent moon on the covers to make it easier to figure out what series it belongs to.
I was surprised by how much I didn't want to read this book. I mean, I picked it up, then put it down, picked it up, put it down. It drove me insane, until finally I was done. I sat there reading going "No. Oh, no. No! NO!" things just weren't going the way I hoped. . .in a good way.
But seriously, 3 boyfriends? Good luck with that! You can't get away from one because of an imprint, you can't get away from another because he's great and hot, and you can't get away from the other one because your in love with him. Well, crud! Your screwed!
The series is getting kind of off track though. Now it's all about romance, I'm not saying that it was bad, it just didn't make much sense.
*SPOILER* I didn't like how the imprint was broken between Heath and Zoey. I mean, I actually liked Heath. Not Loren!
And I also thought that she was changing into an adult vampire when Zoey fell to the ground, clutching her stomach. Not that Loren was dead! I'm glad he's gone, good riddance! But it doesn't make sense. . .Is Zoey already an adult vampire or still a fledging, because her tattoo is filled in, like an adult vampire's, but she's still considered a fledging? Talk about confusing. . .


☺☺☺☺
Go to Review Policy to see how I rate!
Review Coming Soon: