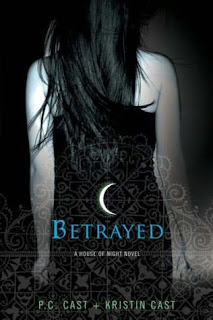 SUMMARY(No spoilers, thanks to Shelfari):
Fledgling vampyre Zoey Redbird has managed to settle in at the House of Night.  She’s come to terms with the vast powers the vampyre goddess, Nyx, has given her, and is getting a handle on being the new Leader of the Dark Daughters. Best of all, Zoey finally feels like she belongs--like she really fits in. She actually has a boyfriend…or two. Then the unthinkable happens: Human teenagers are being killed, and all the evidence points to the House of Night. While danger stalks the humans from Zoey’s old life, she begins to realize that the very powers that make her so unique might also threaten those she loves. Then, when she needs her new friends the most, death strikes the House of Night, and Zoey must find the courage to face a betrayal that could break her heart, her soul, and jeopardize the very fabric of her world. The person she trusted the most has betrayed her. But who?

REVIEW(Caution, may contain spoilers):
I made the mistake of actually reading some of the other summaries for the books to come and such and kind of had this hunch that Niefect(I'm not quite sure how to spell her name) was going to betray Zoey. I actually think that Zoey will be more powerful than any other person before. I mean seriously, she already has her mark filled in AND two tattoos. It's just remarkable.  I was kind of depressed that there wasn't much of Heath in this one. I love knowning what's going on between the two of them. And just because their Imprinted..! They could keep each other awake at the craziest times. I still think Erik is really cool! But I don't like how they threw in ANOTHER guy, Loren. I mean she already has two guys, but a third?? It doesn't make much sense..I can't wait to get my hands on Chosen!

If you liked this one, you'll definitely sink your teeth into A Quick Bite by Lynsay Sands.