I interviewed C. Lynn Barton and wanted to share with all of you, how it went and the Q's and A's! 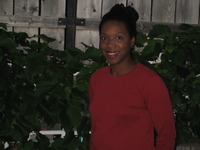 When did you start writing?

"I began writing in 1994. However, it wasn't until 2007 that storytelling became something I wanted to do professionally."


It must have taken a while to write it, was there ever a time you gave up?
"No, I never gave up. The story literally haunted me until I wrote it. The young girl in me begged to come out in some form and tell how life really was for her. As a child, I covered up or put on a happy face when I was crying inside. Actually, I didn't even know I was crying out at the time. When I look back on it, the pain is very apparent. The first three chapters of the book is definately a fictionalized version of the things I experienced. However, I can't called it a memoir or biography."
How long did it take to write, The Redemption Of Holly Dobson? And what is it about?

"Holly Dobson was ceratinly a labor of love written over five years. I wrote many tales after Holly began, but this book was very personal. I needed it to be my best work. Holly Dobson is a woman on a personal journey. She grew up as an abused child with a life-ling goal of having a family of her own. Holly believes love will cure any ill and she does all she can to prove it. Holly does transcend life as she knew it to become a marvelous and profound character."

How did you get the inspiration for, The Redemption Of Holly Dobson?
"The Redemption of Holly Dobson is inspired by my own childhood in many ways. Although it is a tale of fiction, Holly's emotions certainly ring true in many ways."
Is there any other books your working on right now?
"Yes, I am working on two books, a trilogy, and a collection of short stories. The collection of short stories will be released next alongside a self-help journal."

Everyone wants to be an author at some point, do you have an tips for wannabe authors?
"Keep writing, then write some more. However, it is best to keep a day job to fall back on. Writing is hard work for which no rewards may be gained other than personal fulfilment and a sense of accomplishment."

Not everyone wants to be a writer, how did, or when did, you know that writing was for you?

"Well, I think it is something I always knew. I made up stories as if it was a hobby or just part of my day."
C. Lynn Barton can be found on the internet at www.clynnbarton.com and on facebook at www.facebook.com/clynnbarton.
Who do you want me to interview next?
Written by: Hannah @ Every Little Thing at 11:10 AM

Email ThisBlogThis!Share to TwitterShare to FacebookShare to Pinterest
Marked as: Author Interviews